Polymorph is one of the most useful materials for model making and prototyping. This polymer has all the characteristics of a tough engineering material yet it fuses and becomes easily mouldable at just 62°C.

It can be heated with hot water or a hairdryer and moulded by hand to create prototypes and solve manufacturing problems. Polymorph can be reused simply by reheating it. The material can also be coloured when soft by adding a small amount of food dye. Uses for Polymorph include:

The material is supplied in a self–seal bag. Polymorph may be coloured using food dyes. The polymorph is first fused and then the powder is added and worked in mechanically by hand. Although a labour–intensive process, this is about the only one available at present. 2g of colouring is supplied in a plastic pot.

This polymer (polycapralactone) was first put on the market under the name ‘Polymorph’ in 1998 by Mindsets (at that time Teaching Resources). It followed a chance discovery that an industrial design studio had been commissioned to find additional uses for the material by its manufacturer – who was at the time supplying it as a hot-melt adhesive. It was suggested to the UK manufacturer that the polymer could be used as a prototyping material – particularly in an educational context. A supply line was then opened up to Mindsets with very generous support from specialists within the company. At the time, Mindsets was creating resources for the Technology Enhancement Programme (TEP) – a funded initiative to enrich technology education in UK schools and colleges. The name polymorph was coined within TEP to denote a polymer that could literally take any form. An attempt to trademake ‘Polymorph’ failed because it was clearly already a dictionary word – although that was not appreciated at the time. Mindsets has now supplied many tons of Polymorph over some fifteen years and its availability has transformed the capacity of a new generation of designers to realise and try out ideas – ranging from self-replicating Rapid Prototyping machines to ‘organic robotic fish. Other organisations now supplying polycapralactone in small quantities have adopted the word Polymorph and this has become in usage more or less synonymous with this polymer. 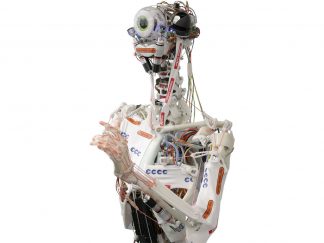