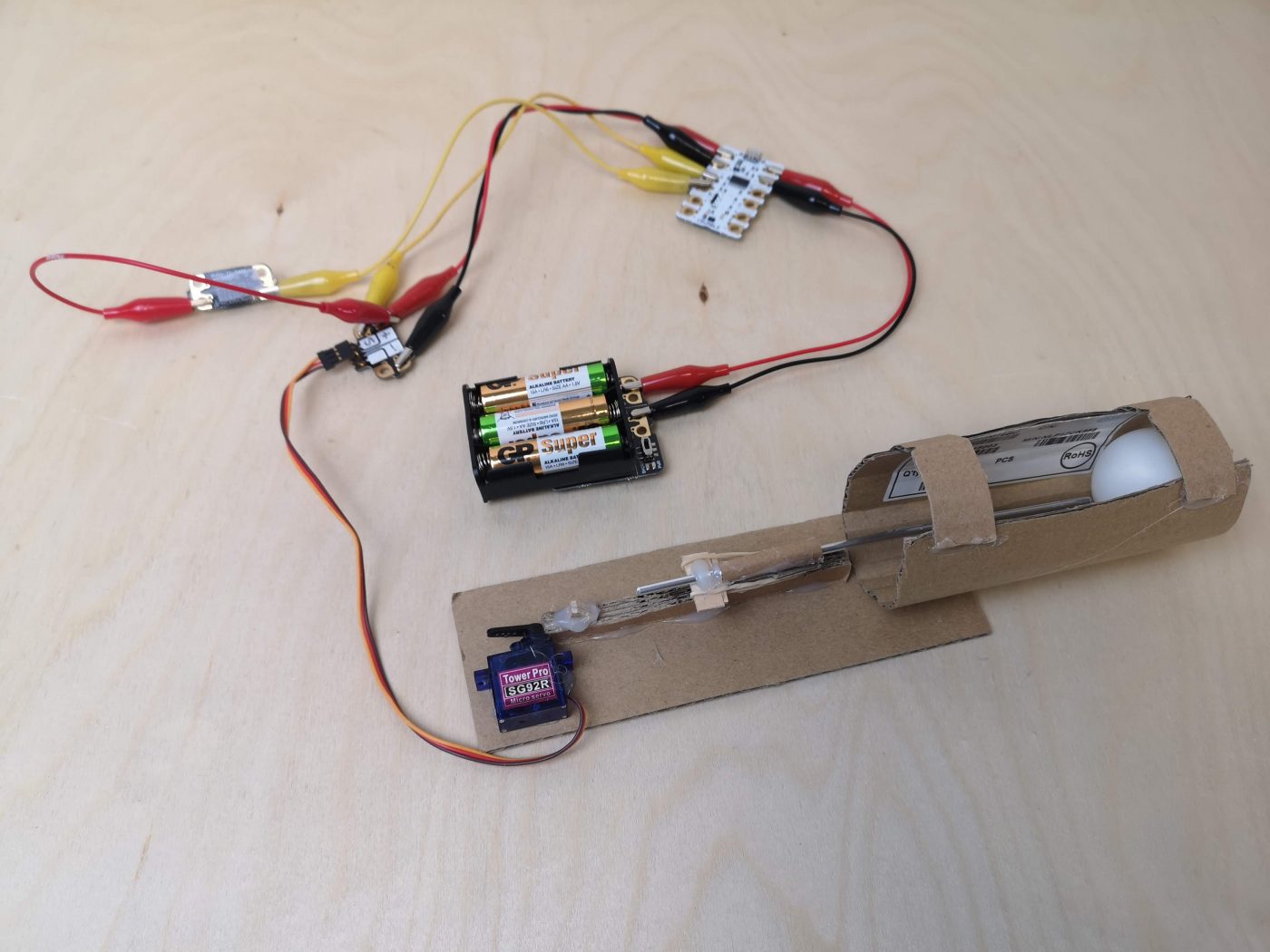 One of the most crucial parts of any design-based work is the process of iteration. Put simply, it is the process of Design, Prototype, Evaluate. Improving our thoughts and ideas, and accepting that our own work will likely never be perfect and will always have room for improvement are important skills. It is also important as some problems with a design may only be discovered whilst making or using a product. Iterative design irons out the wrinkles, and makes for a better end result.

To give the process a go, we decided to make a ping pong ball launcher, using the Crumble. There was, however, a crucial design constraint. Could we design one whose only powered part was a servo?

It is worth noting at this point that this isn’t necessarily a project you SHOULD do with students, unless you can definitely trust them.

After thinking for a while, we came up with our first design: a trebuchet-inspired design with the servo providing the ‘throwing force’. If the servo is capable of launching a ping pong ball, then this method should prove it.

After extending the main launch arm to the point at which it is almost too heavy, we can say that it doesn’t work very well. It definitely shifts a ping pong ball, but it doesn’t have enough velocity to keep traveling very far.

After prototyping and evaluating the first main design, we decided to go down a different route. We were inspired by a cardboard ping pong ball launcher that we found on YouTube after some research. We realised that we could use a similar firing mechanism, which uses a rubber band to provide some elastic potential energy. The servo could then be used to release the mechanism, hitting and launching the ball.

Our first attempt was much more promising. It successfully launched the ping pong ball a surprising distance! There were, however, some improvements to be made. We decided first of all to address the point of contact between the aluminium rod and the ball. We thought that area wasn’t big enough, so we 3D printed an adapter for the end.

We added the adapter and launched the ball a few times – it definitely made better contact with the ball. But there were still a few issues. The servo arm would occasionally miss the main launch shaft (aluminium rod), the body was beginning to wear down from the impact of the wooden stop and the whole thing felt a bit flimsy.

Because of the success that we had had with this design, we thought that we didn’t want to come up with a new one – instead we decided to refine and model, and 3D print a big portion of it, using a lollipop stick in place of the aluminium rod, as it felt safer.

Without going through the iterative design process, our design wouldn’t be anywhere near as good. This important process happens all of the time – whether it be a blog post, a leaflet or a new product. The process of evaluating and refining work is crucial.